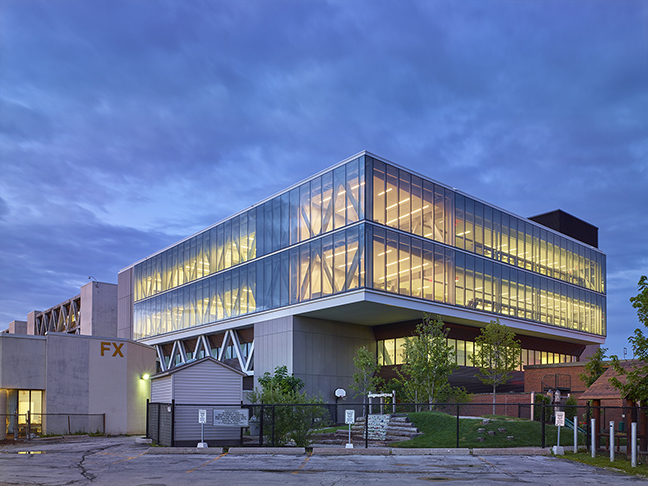 The Humber College F Building Health Sciences Addition grew out of a feasibility study performed by Montgomery Sisam that examined adding a two-storey addition to the existing building on an incredibly tight schedule.

The F Building addition provides a valuable opportunity to respond to the client’s programmatic need for the expansion of their Health Sciences facilities while at the same time enhancing the student experience by orienting the building toward the Humber Arboretum.  Floor to ceiling glazing wraps the west façade of the addition where a fully wired Study Bar and Student Lounge provides students with stunning panoramic views of the arboretum below.

The design reflects the philosophy that the “places in between” have a meaningful role to play in supporting the informal and spontaneous interactions that inspire creative thinking.  The importance of a flexible, non-traditional learning space is also modelled in the facility’s classrooms, which have the ability to quickly be reconfigured to accommodate a wide variety of educational models.

Picking up on the strong geometry of the structure of the existing adjacent buildings, the addition is supported by a new steel truss system that offers an interesting juxtaposition within the forested landscape.  To further reinforce this contrast the glazed addition will be clad in a curtain wall with an intricate triangular geometric frit.

This was taken from montgomerysisam.com